In 1985, while still working on Dead Letters, I became fascinated by the idea of wound reading, and committed myself to the practice of vulnerology, collaborating with Phil Sims on a “wound box” that combined brief caption-texts with his dry point etchings, while also fabricating a series of “wound diddlers” that linked rubber block carvings with surgical tools in a variety of small assemblages; objects that offered a kinetic structure for sustained contemplation of wound contours. 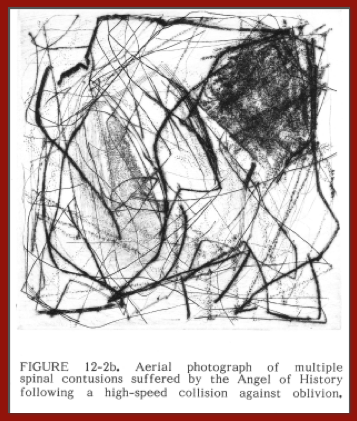 The captions draw from medical text books, plays, cultural theory, art history, hermeneutics and other sources to provide a playful exploration of poetic overtones within the woundscape. A continuous sequence of the wound box caption texts is available here.

With the launch of New American Radio, I then elaborated the caption-texts into the continuous monologue of a “vulnerologist” (played by me, with voice slightly slowed down), using the wound diddlers as props for the vulnerologist, as he poked and carved inside the operating theater.

The related idea of a “woundscape” originates in my experience as a passenger in a near fatal car accident (involving a total of eight people, suffering a wide range of serious injuries that created a complex and multilayered woundscape) on a dark road in rural Maine, when I was sixteen. More on the accident, and it’s many dimensions within the woundscape can be found here.

For a complete transcription of the play, see: Display Wounds: Ruminations of a Vulnerologist, in When Pain Strikes, Theory Out of Bounds volume 14, University of Minnesota Press, 1999.

Critic and theorist Thyrza Goodeve wrote a provocative essay that further explores the notion of an articulate wound: No Wound Ever Speaks For Itself, in Artforum, January 1992. 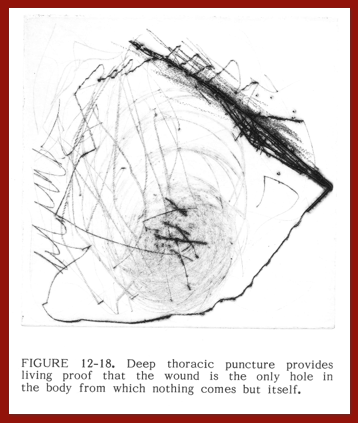