William S. Burroughs suggests that language often behaves like a virus as it passes from mouth to mouth, gathering microbes along the way: microbes provoking strange mutations that may express themselves through the most toxic utterances.

With the below acoustic amuse bouche dating from the year 2000, I propose that at certain times and at certain places, language may also behave like  a fungus, a fungus that if left to its own urgent proliferation soon becomes entangled in the axons and dendrites of the human brain, leaving us with the severely impaired fluency.

I have experienced the fungal quality of language myself when on a hot day in the New York subway, I chanced to hear one departing passenger say to another: So you want to talk about squid? Then they were gone, leaving me in deep corn smut. For whether it was something in the actual voice, or some magical mycological chemical embedded in that precise arrangement of phonemes, it was only a matter of minutes before my entire brain was helplessly possessed by a numbing and relentless repetition of this one cruel sentence, in every stage of fungal bloom and decay — so you want to talk about squid?

Somehow, through instinct or intuition, I sensed that my only hope was to write down what I was hearing in my head, and as I did so, indeed, a squidlike form began to emerge on the page, a form that then became a score for a bit of fungal audiophony: 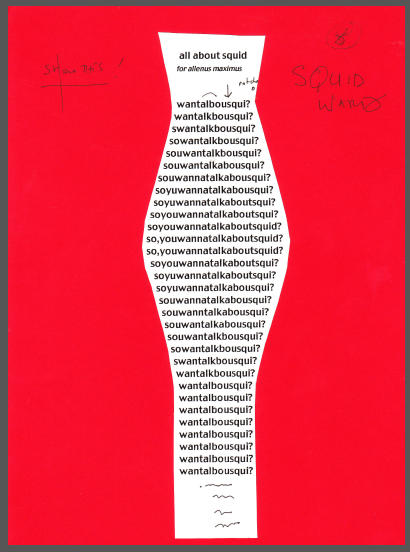 This entry was posted on Tuesday, September 4th, 2012 at 8:53 pm and tagged with all about squid, american audio art, gregory whitehead, gregory whitehead audio art, sound poetry, text sound and posted in Gregory Whitehead. You can follow any responses to this entry through the RSS 2.0 feed.
« Evil Axis
Leave It or Double It »