A collaborative marionette theatre from 2004, inspired by (and using) the extraordinary dolls (and voice) of Michel Nedjar. As described by Allen S. Weiss:

Monsters manifest the plasticity of the imagination and the catastrophes of the flesh. Monsters exist in margins. They are thus avatars of chance, impurity, heterodoxy; abomination, mutation, metamorphosis; prodigy, mystery, marvel. Ultimately, monsters are indicators of epistemic shifts. As such, Nedjar’s dolls are personifications of anguish, memento mori, simultaneously creations in order to remember and remembrances in order to forget.

They effectuate a return of the repressed, a precarious overloading of the memory system that permits a mourning without which history itself is an abomination. These anxiety producing objects evoke a counter-sublime, indicating those terrors, inexorable and insidious, that exist within our own bodies. 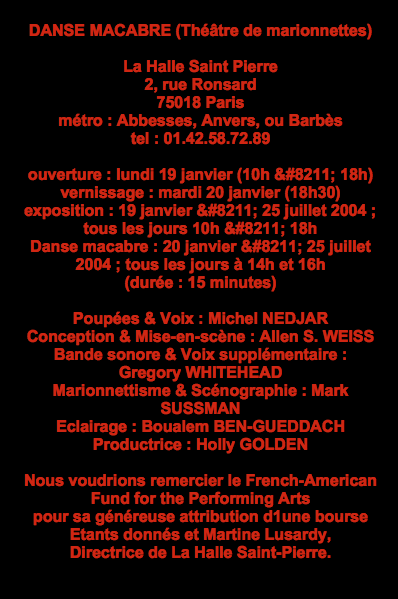 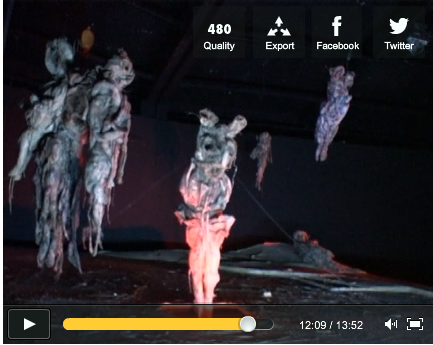 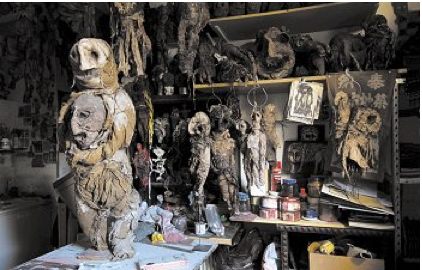 The audio track (which also served as the “pulse” for the puppet master, Mark Sussman) has been broadcast on its own a number of times, and is linked through the simple frame animation below. The voice belongs to Michel Nedjar, and his performance includes passages voiced in an imagined variation of Yiddish, conjured from his childhood.