Four Trees Down from Ponte Sisto

I first came across a sampling of Sharon Charde’s poetry completely by chance, while browsing through a local women’s magazine. I was instantly struck by the disarming directness and documentary detail in poems that dared to articulate the unspeakable loss of her son Geoffrey while a student abroad, under circumstances that remained obscure, with no known witnesses. At the bottom of the page, there was mention of a forthcoming reading at a library nearby, which I attended. As Sharon read, I was once again moved by the calm precision she was able to bring to the most terrible scenes, and by the rich polyphonies that gave subtle dimension to such a raw wound: 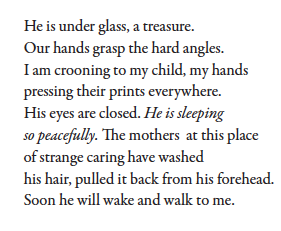 stanza from MOTHER’S DAY AT THE MORGUE

That evening confirmed my sense that her poems, written across three decades, comprised an important body of writing that deserved a wider audience. Fortunately, Sharon agreed to the idea of a BBC radio adaptation, and generously provided me with Geoffrey’s own journals, photographs and documents, as well as many supplementary stories and recollections, some of which I then incorporated into the script. Since her writings obliterate the idea that grief unfolds in tidy linear stages, I became increasingly committed to the fundamental truthfulness of an unresolved narrative structure, where the traumatic moment of the fall remains vivid, through to the very last sound.

We considered many actresses to give voice to the play, though my first choice was always Anne Undeland, who brings an open spirit of brave simplicity and deep insight to everything she does. I knew that Anne had recently performed a one woman show based on the poetry of Emily Dickinson, and she has worked with me on a number of other radio plays, including The Loneliest Road. As it happens, she also lived in Rome during the 1980s, and knew the Trastevere neighborhood where Geoffrey had lived, which helped bring the story fully into the present.

GIVING VOICE TO THE WOUND

For music and sound design, I had in mind the image of a precious Roman mosaic that I had let slip from my hands, and thus it was left for me to piece it together again. There would be jagged edges to be sure – imperfections – and sometimes the edges might cut fingers. To achieve this acoustically, I improvised to recordings of Anne’s voicings on mandolin, bowed psaltery and a cigar box guitar, and then added a variety of sounds to the mix, including the snapping of twigs and the crushing of dry leaves.

I knew Geoffrey liked Simon & Garfunkle, and that he had used a quote from the song “Old Friends” in his High School yearbook. Though I never actually play the song, those chords and rhythms were certainly on my mind as I slowly assembled the final montage.

An informative article by the Litchfield County Times can be found here.

The play will air on BBC Radio 4 on Friday, June 29th. The first three minutes are excerpted here:

From the blog Beyond Goodbye: