Pressures of the Unspeakable

October 3,1991, I arrived in Sydney, Australia with little more than a general concept of an Australian Screamscape, carried inside the fictive envelope of an imaginary Institute for Screamscape Studies, of which I was  the founding director. Over the following weeks, in collaboration with a small network of associates, we would give voice to a continental nervous system, coaxing the underlying  screamscape out into the public airwaves.

1. The elaboration of a screamscape infrastructure: founding of the Institute, establishing a 24 hour answering machine, called the “screamline” in reference to the acoustic journey that screamers take into their own interior space while screaming; the designation and opening of  a dedicated scream room within the Australian Broadcasting Corporation (ABC); and the circulation of “scream discourse” within various news media, via guest appearances on talk shows.

JOURNEY TO THE INTERIOR

2. Monitoring of the scream flow, and the development of various techniques for scream hermeneutics that would allow individual screamers to find their own rightful place within the national screamscape.  At this stage, periodic memoranda and reports were circulated through the ABC and the University of Technology regarding the genesis of the screamland and on various aspects of scream theory; econdary publicity accomplished through release of select screams to television and radio programs. Lubricated by discourse and publicity, the scream trickle soon became a flood, in both the scream room and on the screamline, and the producer “nodes” at the Institute began to feel the first effects of The Pressure.

In addition to framing the nervous system, the telephone-microphone-tape recorder-radio circuitry also provided the key for the acoustic demarcation of pressure in the system: distortion, the disruption of digital codes inside the scream room; pure unmanageable noise. The scream as animal energy ruptures signal clarity, exceeding the thresholds of communications technologies not designed to accommodate such vocal intensity.

3. The completion of the circuitry, the breakdown of the last nodes of resistance within our own nervous systems, the passage of all screams fluidly through a now massive network of private and public scream events. Strange things began to happen as we listened again and again to hundreds of “blown” and distorted screams; a networked dreamland turned for a while into screamland blues. 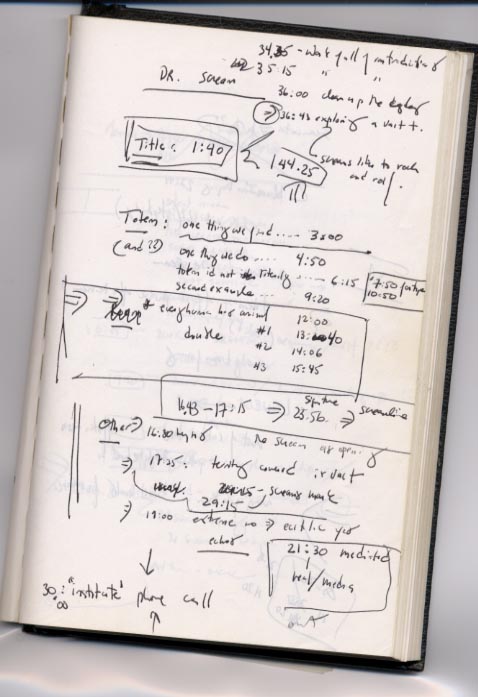 FOR PRIVATE USE; FOR BROADCAST OR OTHER PUBLIC USE, PLEASE EMAIL ME

Two days after the repeat broadcast, after a moment of silence, the screamline was unplugged, and the nervous system was put to rest; all scream donations were deposited in the “scream bank”, and archived for study by future generations of screamscape researchers. The last memo and ultimatum from the Institute (lodged as it was at the Ultimo ABC) circulated, including a quote from Ludwig Wittgenstein:

At times, the research clinic of the production studio did indeed feel like a psycho-acoustic descent into primeval chaos. Yet the magnificent, affirmative, ecstatic, violent, explosive and celebratory nature of the materials restored us, if not to “home”, at least to a very real, and very human place.

Pressures of the Unspeakable has aired numerous times around the world; the concept has been repeated in different shapes and variations in other countries, sometimes with me present, other times as a distant (or even unknowing) collaborator.

The Australian Screamscape would not have been possible without the help of many associates, most notably the peerless Listening Room executive producer Roz Cheney, whose skill and craft was only matched by her generosity of spirit; the discriminating ears of the brilliant John Jacobs; the unflinching airborn dasein of my mentor and friend, poet Martin Harrison; and of course the hundreds of callers and scream donors, in all their energy and invention.

Click on the screamers below for the complete script. 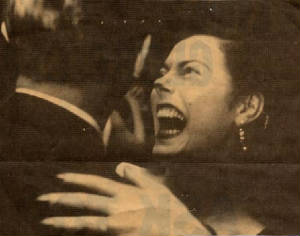 A hybrid documentary play, weaving together three stories: a scripted witnessing of an electrocution; documentary interview memories of burns, fires and suburban oblivion; and an imaginary philosopher on the phenomenology of fire, neurobiology and the gaze of ecstatic death.

Created for New American Radio in 1990; released on cassette  in a very limited and hand made (and hand singed) by MINERVA EDITIONS; now released into the pyretic commons: 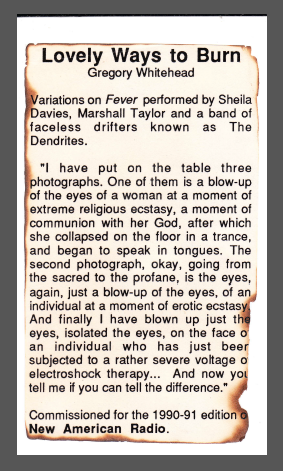 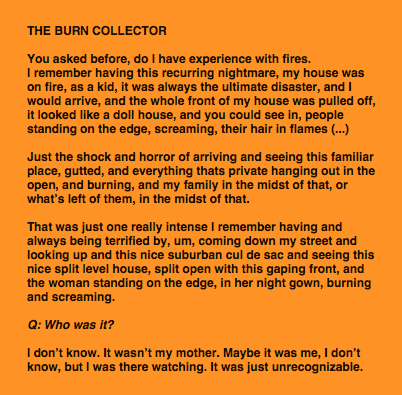