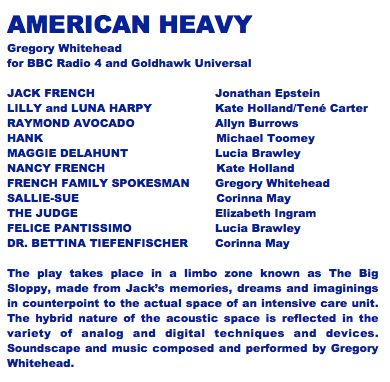 I confess to harboring a certain perverse fascination for the figure of the Shock Jock, the bottom of the media feed chain, and therefore the most highly paid. The very antithesis of the enlightened highbrow radiomaker, the successful Shock Jock is a relentlessly abusive persona whose combination of manic charm and bottomless cynicism seems to strike at the black heart of our Shining City On A Hill.

In 2001, the centennial for Marconi’s famously twitching letter “s”, dot dot dot, the first translatlantic wireless transmission (and yes, I am aware this S may ultimately have been more imagined than real), coincided with the 150th birthday of Herman Melville’s Moby Dick. The coincidence seems apt, as I have long thought of Captain Ahab as America’s first Shock Jock:   Ahab, struck by lightning, and then never stops talking, as he berates, cajoles and ridicules his doomed crew, rants that are supported nocturnally by the tapping of his wooden leg against the quarterboards of the Pequod, an encryption that perhaps only Queequeg understands; Queequeg, whose entire body is a carved cosmogony for his people, and whose coffin is therefore a kind of book box, a box that in turn becomes a lifeboat for the lone survivor, who we call Ishmael — SOS.

The Shock Jock convenes community, and then puts it to waste, and in so doing replicates in daily, hourly episodes, in a thousand segmented markets, the fallen status of true dialogue in the time zone of this still fairly new yet already battered millenium — and so like this, Jack French sinks into the Big Sloppy: